The stock market tracks GDP in the long run. To show this, I have plotted real GDP and the S&P500 index(both from multpl.com) since 1930 below.

Two things are apparent from the chart above:

The ratio of stock market value to GDP serves as a useful valuation metric. The market is cheap when this ratio is low, and expensive when it is high. According to Warren Buffett, the percentage of total market capitalization relative to GNP is “probably the best single measure of where valuations stand at any given moment.” You can track its value on this link from GuruFocus. I have reproduced today’s chart below: 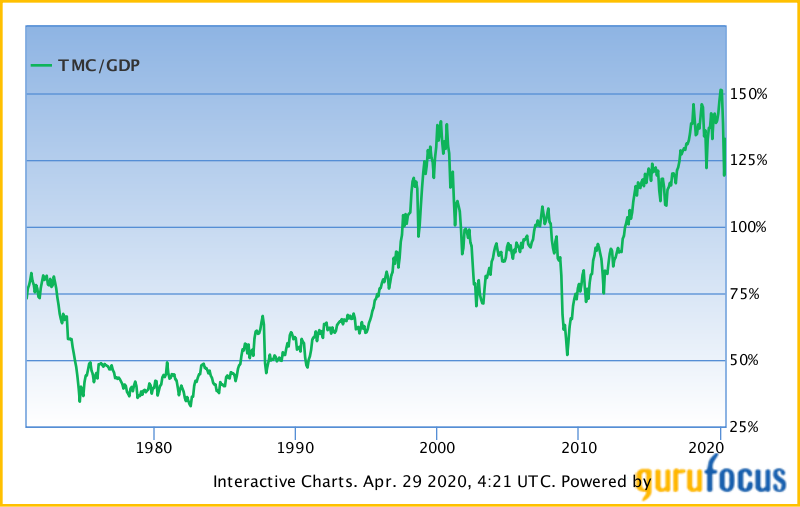 By contrast, the ratio “fell” from over 150% to under 120% in March and stands at 133% as I write this. Such high valuation is surprising because we are in a lockdown caused by a pandemic that will bankrupt a lot of businesses unless they are bailed out. The stock market, after falling precipitously in March, made a rapid recovery in April. It is widely speculated that the recovery is due to purchases of securities by the Federal Reserve. Quantitative Easing (or QE, as such purchases are called) is quite possibly a contributing factor. Tom McClellan has a compelling chart (reproduced below) showing that periods after the start of QE in large doses saw stocks rise rapidly. The chart also suggests that the slowdown or ending of QE coincides with weak stock market performance.

The following article describes this behavior in more detail. As for whether we are undergoing QE “in large doses”, see the following chart. Notice the spike on the right? That’s the latest round of QE.

If the Fed had not resorted to QE, the S&P500, which trades near 2860 today would probably trade closer to 2000. This is a rough guess based on earnings-per-share (EPS) projections and price-to-earnings (P/E) ratios in crises. Ed Yardeni expects 2021 earnings for the S&P500 to be 150, and applying a multiple of 13-14 gives us an index level of around 2000. An alternative explanation for the stock market’s April rise is that the market is pricing in a quick recovery and return to pre-crisis levels of profitability. This hypothesis seems less plausible because projections of GDP growth for 2020 and 2021 suggest that GDP growth will not be back to 2019 levels until 2022. I am using projections from the IMF, which can be found here. The path to recovery is uncertain with potential negative outcomes such as multiple waves of infections (which are likely, see this paper), and positive surprises such as cures and vaccines.

Another observation is narrow leadership in stocks. Even as companies at risk of bankruptcy continue to trade well below pre-crisis lows, the five largest stocks in the S&P500 have held their ground. The combined weight of the top five stocks has not been this high since 1980s. Urban Carmel posted a chart from Bianco Research showing how such concentration tends to coincide with market peaks. Caveat: the chart does not show “peak” concentration today. It shows rising concentration in the top five stocks, but the peak may be ahead of us.

Some of these observations, such as the scale of QE and the narrow market leadership, suggest a bubble. However, a bubble does not mean imminent collapse. The Federal Reserve, the Treasury, and all branches of US government have been taking unprecedented steps to prevent economic collapse. I wouldn’t be surprised if the Fed resorts to purchasing stocks, or to widespread debt forgiveness. A lot of critics will complain that such actions introduce moral hazard (encouraging bad behavior in layman’s terms), but 1. it is hard to stop the government, and 2. the government could argue that a business that saw its revenues collapse leading to crushing losses in a pandemic did not necessarily engage in bad behavior. The public stock of many businesses (such as retailers) is either worthless or worth something meaningful depending on how government chooses to act.

The focus of this article had been on the US economy and stock market. The US may succeed in propping up its economy/market, but some other countries may not be so fortunate. I suspect that we will see more businesses collapse worldwide as with each additional week of lockdown or decreased business, cash runs out. In times like this, having a high level of liquidity can be a boon for investors.

One final word. I am grateful for what I have today. Being able to work from home is a privilege. COVID-19 and the policy response to it is inflicting excruciating pain on millions worldwide. The critically under-resourced have very little say in policies that dictate their survival. I made a small donation here yesterday. Give what you can wherever your heart desires.

US stocks were overpriced in January. Late April feels like a bubble.

The information on this forum is provided without any express or implied warranty of any kind. This information does NOT constitute financial or investment advice. The information is general in nature, and is not specific to the reader. YOU SHOULD NOT MAKE ANY DECISION, FINANCIAL, INVESTMENTS, TRADING OR OTHERWISE, BASED ON ANY OF THE INFORMATION PRESENTED ON THIS FORUM WITHOUT UNDERTAKING INDEPENDENT DUE DILIGENCE AND CONSULTATION WITH A PROFESSIONAL BROKER OR COMPETENT FINANCIAL ADVISOR.
Loading Comments...
%d bloggers like this: